The Grillehouse’s roots are entwined with its Chef and Owner Clint Boutwell. Born in Tyler, Texas, Chef Clint moved to Oxford, MS at the age of 11. His love for food and restaurants were developed when dining at his Grandmother's kitchen table, and working in the Mississippi Delta. He took his passion and enrolled in culinary classes; performing an internship with Emerils in New Orleans. He spent additional time in the “Big Easy” at a local steakhouse, albeit brief, due to Hurricane Katrina. Due to the hardship, Clint and his family uprooted to Tennessee where he continued to develop his culinary skills. Feeling the ties pulling at him to return home, Clint and a childhood friend worked together to open McAnerney’s Steak and Seafood outside of Winona, MS. This is where he developed and perfected his signature steak preparation technique used today at The Grillehouse.

At this point, Clint had the drive to be not only an Executive Chef but also have the opportunity to put his name on the door with full culinary discretion. In Grenada, MS he found it at the Orleans Bistro. Wanting to continue his growth and culinary experiences, Clint decided to take off to Memphis, TN. He opened Orleans on Front, and then a brief stint in Vail, CO where he worked as an Executive Chef at the Vail Chophouse. Following the famous lyrics, “Who says you can’t go back?”; Clint did exactly that. He returned to Oxford to create his very successful steakhouse concept, Oxford Grillehouse. Finding a great corner location on the square, Clint made the major investment to be the place to go for steak and Southern-inspired seafood dishes. Over the course of the next few years, Clint took his concept outside of the quaint Oxford Square and into the town of Southaven.

Southaven has been a welcoming city since the opening of The Grillehouse in August of 2017. Conveniently located in the Snowden Grove Entertainment District, The Grillehouse offers dinner 6 nights a week, brunch on Sunday, and a big patio for live music when the weather permits!

Whether you are in Oxford or Southaven, your steak and cocktails will be one and the same and always delicious!

The Grillehouse is a casual fine-dining restaurant with old-school charm mingled with a contemporary atmosphere. The dress code is comfortable, but men please no tank-tops or backward hats.

Our menu is designed to let the guest choose what they want to eat, and not be told a dish "must" come like this. Many top steakhouses are a la carte allowing for the guest to add sides at an additional cost and usually an amount fit for the entire table. We include 2 individual sides in our price and encourage you to eat what you like. The smoked gouda mac & cheese or the blue cheese wedge with marinated tomatoes, bacon, and a sweet balsamic reduction shouldn't be missed! We cut all steaks in-house from Certified Angus Beef Brand (CAB), the top choice near prime. Our Prime Grade dry-aged Ribeye is aged 45 days and leaves the palate with an amazingly rich flavor!

Join us frequently & with an empty stomach! 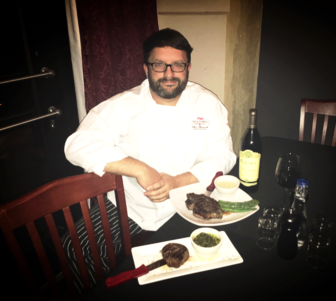